A story in the New York Post had this screaming headline:[1] 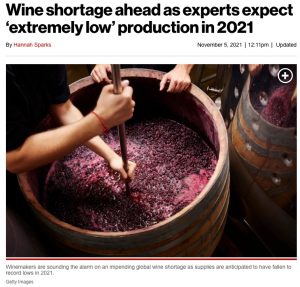 The story was based on a statement from (deep breath) Director General Pau Roca of the International Organisation of Vine and Wine (OIV).[2] I urge everyone to read the details of his statement. My purpose here is twofold:

There are more than 24 countries on the planet that have wine industries. I suspect M. Roca has included only countries that are members of his organization. Georgia (the country) produced 16.3 million gallons of wine in 2014 but is not included in the OIV dataset. Wikipedia lists 73 countries that produced wine commercially in 2014. A complete list is at the end of this article.

Regional Analysis: the EU, the Non-EU North, and the South

Here’s the breakdown of 2020 and 2021 wine production in the three major regions using OIV designations.[4] 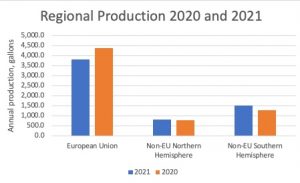 The decrease in output from the EU is greater than the increases in the other two regions. Global production in OIV countries is forecast to decrease by 4.6%, 328.9 million gallons.

Adding it all up, we can say that OIV coverage is excellent for the EU, very good for the southern hemisphere, and OK for the non-EU northern hemisphere. 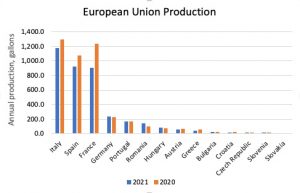 A late spring frost damaged the winegrape crop in Italy, Spain, France. Output from those three countries alone in 2021 is forecast to be 600.9 million gallons less than 2020. To give this some perspective total U.S. production for 2020 was 600.6 million gallons. In effect, the lost production in three European countries is comparable to the U.S. producing no wine at all. This is a big hit to global wine output.

Those three countries make up 82% of total EU output. Production is forecast to increase in seven countries. Germany, the fourth largest producer, is projected to have output increase by 4%. Sadly, that’s only 8.9 million gallons.

The elephant missing from this room is China. For reasons known only to Beijing, that country’s data was not available to the OIV. As noted earlier, in 2014 China was the fifth largest wine producer in the world. This is a serious dent in OIV data. But it’s China. There is not much anyone can do to extract data from them. And, even if there were figures, the source is China’s government bureaucracy. At this point, no data is better than misleading figures.

Here’s the comparison of the non-EU northern hemisphere countries. 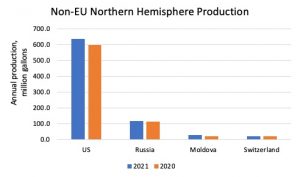 This is an interesting group. Take a look at the list of countries.

Three continents represented by six countries (depending on how you count Australia and New Zealand). Can we really come up with a believable number for the global price elasticity of demand? Well, I wouldn’t try. Thankfully, a brave wine economist, James Fogarty, has done this.[5] I’ve taken the liberty of roughly averaging Prof. Fogarty’s estimates. My guesstimate is that the global price elasticity of demand for wine is -0.7.[6] Among the OIV countries, wine production is forecast to change by -4.6% in 2021. We can do a little arithmetic.

It looks like the average price of wine will increase by 6.5%. Assuming, of course, that the OIV estimates reflect what’s happening in the rest of the world.

As promised earlier, here are the 74 countries that produced wine in 2014.  They are sorted by 2014 production volume.

Economists work with data. We are a bunch of number-crunchers. Some, like James Fogarty, use sophisticated statistical methods. Others use math and Excel. No matter. The era when an economist could publish a paper that’s pure mathematics with no data supporting it is over. Access to many unusual and interesting datasets has opened up a world of exploration.

My favorite example is an article by Rebecca Diamond, Tim McQuade, and Franklin Qian.[7] They exploited an odd change in rent control laws in San Francisco in 1994. They looked at data before and after this change using comparable rent controlled and non-rent controlled units. The data describes address-level migration information as well as detailed housing characteristics of each household. They found that[8]

Tony Lima has been a wine fan since arriving in California from the east coast in 1974. He's lived the growth and expansion of the industry first hand. He's seen the fickle California Wine consumer fads pop up and burst... the craze for Zinfandel, then oaky Chardonnay, then Merlot, now Pinot Noir. His day job was Professor of Economics at California State University located in Hayward. He retired in 2016 to pursue full-time blogging. His undergrad degree in chemical engineering (MIT) and his MBA ( Harvard) and Ph.D. Economics (Stanford) are the root of his interest in the Business of Wine. He is a card-carrying member of the AAWE - Association of American Wine Economists. 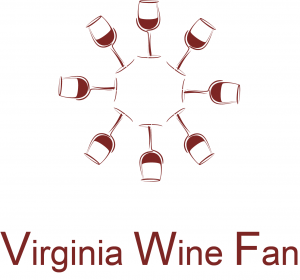